These Seneca words are actual and in line with Besana policy. Besana, a company of Mariano Comense founded in 1903, developed its industrial unit on a 20.000 square meters area, and renewed itself aware of the changes of the market needs. Nowadays like in the past, Besana follows its company philosophy: in the forefront as regards technology and tradition for high quality furniture, always using guaranteed materials and carefully according to law, with the utmost ecology respect. Besana proposals are various: from furniture accessories to wall bookcases, from tables to chairs, from beds to equipped wardrobes and children’s bedrooms.


The most important characteristic of the company is its flexibility, being in the lead without disregarding tradition. Besana, indeed, preserves the past but also looks at the future. “Besana Mobili of Mariano Comense is almost one hundred years old but doesn’t look it. The wisdom in combining tradition and innovation represents the temporal bridge between the modern industry and the small workshop in Garibaldi street where, in 1903, the founder Luigi Besana taught to his younger brothers the secrets of furniture makers. In 1923 the company moves to a larger workshop, where the production of high quality furniture goes on, until 1939.
During those years the company management decides to open a larger factory and test new machineries that accelerate the production, with excellent finishings and lower prices. In 1957, at the “Fiera Campionaria” in Milan, Besana shows a bedroom whose characteristics are a significant turning point in the furniture construction and polishing.
In 1961 Besana Mobili starts the construction of a new factory where its lifelong dream can be realized: producing high quality furniture through industrial processes that represent the most modern concept in this sector. Thanks to the complete manufacturing cycle, based on automatic machineries and installations, the production becomes wider and constantly improves. Co-operating with important designers and with its internal design studio, Besana specializes in the production of design furniture: an ascent career, recognized and appreciated.
History and creativity, technology and authentic handicraft…the challenge to the future has just began. 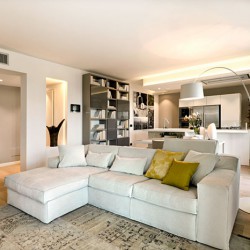